Avenue Range-based Glatz's Black Angus stud has sold a half share in one of its top stud sires for $20,000 to another local stud, Mandayen at Keith.

"We had been searching the country for the last 12 months to 18 months for a calving ease bull and found him in our own backyard," he said.

"He has a great balance of figures with calving ease but still enough performance but also the structure and phenotype that we look at first - he is the total package."

Glatz's Black Angus has already used the Qld bred bull for two seasons season and Mandayen will use the Matauri Reality 839 son for spring joinings in their Keith stud herd.

"We are trying to breed more calving ease bulls in the next two to three years for those building their herds and chasing replacement heifers," Mr Gommers said.

Black Angus stud principals Ben and Samantha Glatz bought the bull in May 2018 from Justin and Kate Boshammer ahead of Glenoch's annual on-property sale.

"A good friend of mine who is an agent at Yass, NSW, saw him on-property at Glenoch and sent me some photos and a video and the negotiations started from there," Mr Glatz said. 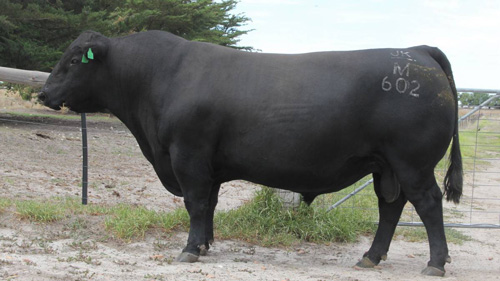 "We looked into his production history, there were no holes in his pedigree as far back as you look- he is out of a heifer bred by (Glenoch) Hinman H221 which performed extremely well in the Angus progeny test."

Mr Glatz said Makahu had passed his impressive phenotype and excellent structure onto his progeny with the first sons to be offered at the 2021 Black Angus sale showing plenty of promise.

"The biggest challenge with the emphasis on estimated breeding values in the Angus breed is breeding Angus cattle with structure, type and docility," he said.

"He (Makahu) has held together particularly well here in the SE of SA."

Makahu is also one of the highest selling domestic-bred Angus bulls in AgriGene's semen catalogue.