Reproductive efficiency is the major contributor to profitability in a beef breeding business. Your bulls influence on pregnancy rates and calving span is often overlooked. Joining a large number of cows in a short natural service breeding season requires fertile bulls.

The most influential characteristic ensuring the success of a bull to impregnate cows early during a limited breeding season is scrotal size.

Actual scrotal circumference has been proven as the measure that best predicts the output of sperm cells during mating.

This correlation relates to the volume of sperm producing tissue that a bull possesses. Actual scrotal measurements need to be interpreted in relevance to a bulls age.

The scrotal size of bulls directly affects the fertility of his daughters. If you breed replacement heifers from sires possessing large scrotal size, you can expect those females to reach puberty at a younger age, conceive early in the joining season and re-breed sooner post calving.

Scrotal Size and Age at Puberty are the reproductive traits with highest heritability. 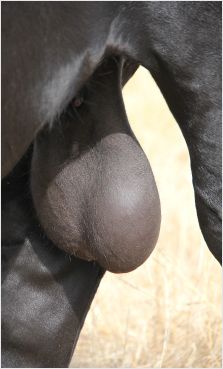